OUT FOR A FAMILY STROLL 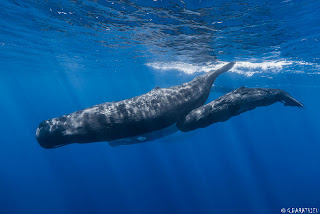 In this majestic photo we see a mother and baby Sperm whale swimming in the ocean. The Sperm whale (Physeter macrocephalus) is the largest of the toothed whales. Its name derives from a waxy liquid called spermaceti, found in its enormous head. The sperm whale is also known as the cachalot.
Mature males average at 16 metres (52 ft) in length but can reach 20.5 metres (67 ft), with the head representing up to one-third of the animal’s length. The sperm whale feeds primarily on giant and colossal squid. Plunging to 3 kilometres (9,800 ft) for prey, it is the deepest diving mammal.
Its clicking vocalization, a form of echolocation and communication, can be as loud as 230 decibels underwater, making it the loudest sound produced by any animal. It also has the largest brain of any animal on Earth, more than five times heavier than a human’s.
Posted by Unknown at 7:36 AM

Email ThisBlogThis!Share to TwitterShare to FacebookShare to Pinterest
Labels: picture of the day